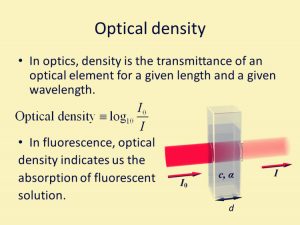 Optical Density
Optical density, sometimes written as OD, is a measurement of a refractive medium or optical component's ability to slow or delay the transmission of light. It measures the speed of light through a substance, affected primarily by the wavelength of a given light wave. The slower that light is able to travel through a given medium, the higher the optical density of the medium.