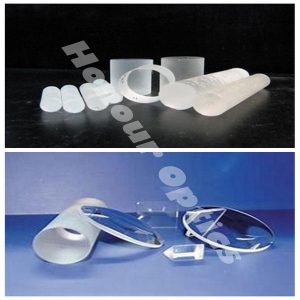 Material properties including the transmission, refractive index, and hardness of the window substrate can be critical for deciding which window is the best choice for your application. Several  key properties for selecting the appropriate window for your application include the index of refraction, Abbe number, density, and coefficient of thermal expansion. The selection guide below lists the optical, mechanical, and thermal properties of our available window substrates as well as their size and thickness ranges

Coefficient of Thermal Expansion
The coefficient of thermal expansion describes how the size of the glass will change with changes in temperature. This property is a key factor in applications involving extreme temperatures and quick temperature differentials.