Fluorescence microscopy is a method of observing photo-emissive spectra from samples, and acquiring fluorescent signals that are roughly one million times weaker than the incident or one thousand times weaker than the scattered light. Observing the fluorescence of an analyte requires a sensitive array comprising an incident light source and robust optical filters with exacting out-of-band rejection parameters. This setup enables researchers to perform real-time analysis of a sample’s fluorescent qualities – but first, the analyte must typically be treated, stained, or chemically compounded with a fluorophore. 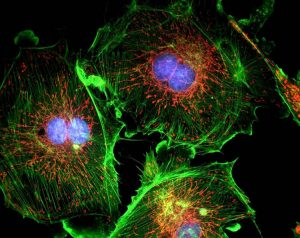 Different fluorescence microscopy instrumentation requires fluorophores of varying excitation and emission wavelengths. Given that the relationship between these two phenomena is directly proportional, the observable fluorescent behavior of an analyte is therefore determined by the incident light source – such as a Xenon lamp – and the fluorophore’s wavelength parameters.

Fluorophores typically fall into one of the following categories:

Biological fluorophores are commonly comprised of fluorescent proteins such as GFP. They have been used for cell labeling and characterization with varied rates of success. Samples stained with GFP emit bright green fluorescent signals when excited with ultraviolet incident light.

Soluble organic dyes are among the most commonly applied form of fluorophore for fluorescence microscopy applications. They can be conjugated with macromolecules to enable tracking and characterization of particles in vitro. Absorbing wavelengths between 494 nm and emitting wavelengths of up to 633 nm.

Quantum dots meanwhile are nanomolecular semiconductors that can be intricately controlled to extremely specific geometrical parameters. They can absorb and emit light across much of the wavelength spectrum, including near infrared values.

In fluorescence microscopy, a fluorophore is chemically bonded to macromolecules and introduced to a sample dish or chamber. The incident light of the microscope can excite the entire sample or individual particles within the analyte to determine its fluorescent behavior. This process is complicated by the low energy output of fluorescent processes, as absorption and emission signals often overlap. Drawing any significant conclusions about a sample’s fluorescent characteristics, therefore, requires exceptionally discriminating bandpass filters to separate peak wavelength behaviors and make fluorescent signals detectable by the optical sensor or analyst.

If you would like any more information about performing fluorescence microscopy with our products, please contact us via email:[email protected]