Refractor telescopes
A refractor's size is specified by the diameter of the lens at the front of the telescope (which is called the aperture), and the f/stop. Multiplying the f/stop by the aperture gives the focal length expressed in the units used for the aperture. So a 4 inch f/9 refractor would have a focal length of 36 inches. 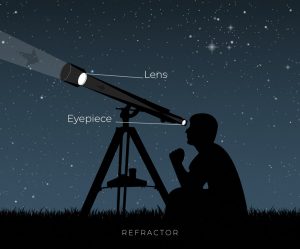 Reflector telescopes
A reflector telescope's size is given by two figures: the aperture, which is the diameter of the primary mirror, and the focal length. Dividing the focal length by the aperture, when both are expressed in the same units, gives the f/stop. So a reflector with a 48 inch focal length and a 6 inch aperture would be f/8. A larger aperture is not an unmixed blessing, because the effects of air turbulence are more pronounced. The quality of a reflector depends on the quality of the mirror. In 1879, Lord Rayleigh observed that an optical instrument was as good as perfect if the difference between the longest and shortest optical paths to the focus did not differ by more than 1/4 wavelength.

Optics meeting this criterion have come to be called “diffraction-limited.” There are different ways of expressing this tolerance. One way is to require that the highest zone on the mirror cannot be more than 1/8 of a wave higher than the lowest zone. The R.M.S. value for a mirror is typically 4 to 6 times smaller than the peak-to-valley error. Trials have shown that beginning observers can easily detect improvements in image quality up to ? wave; improvement beyond that is more apparent to observers with extensive training and experience. 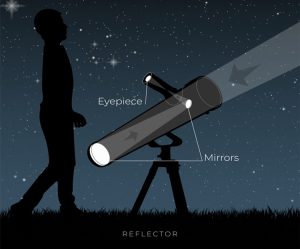 Telescope eyepieces
Eyepieces for consumer refractors are interchangeable with those for reflectors. They are sized by focal length (of the eyepiece, not the telescope) and outer diameter.

Available focal lengths range from 2.5 mm to 80 mm, with 5 to 40 being a more normal range. An eyepiece's focal length is marked on it. In a marking like AH20, the letters indicate the optical construction and the numbers are the focal length in millimeters.

A characteristic of eyepieces which is important to eyeglass wearers is eye relief, the maximum distance an eye can be from the top lens of the eyepiece and still see the entire field. When manufacturers provide this information, it is usually given in millimeters.