Recalling that infrared light is part of the electromagnetic spectrum that is outside the visible light portion, special instruments are needed to detect light at these wavelengths. One such instrument is called a passive infrared sensor. The reason why this type of infrared sensor is referred to as being passive is because it detects infrared light without generating or radiating energy. 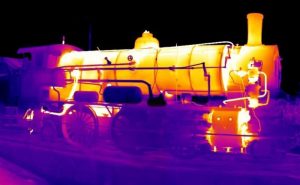 Infrared sensor was used to construct this image of a locomotive

Thermal vs Quantum Well Infrared Sensor
Generally IR sensors can be grouped into two categories: Thermal IR sensors and Quantum well IR sensors. As the name suggests, thermal IR sensors use infrared energy as heat for detection. The sensitivity of this detector is independent of wavelengths, therefore, it is capable of detecting objects in the near IR, mid IR, and far IR bands. In addition, these detectors do not require cooling after exposure, however, they do suffer with slow response times and low resolution.

Microbolometer-Based Infrared Camera System
One of the thermal IR detectors that is currently being used for infrared imaging is called the Microbolometer-based IR camera. They operate by measuring the resistance change of the active elements within the camera upon being heated due to absorption of IR radiation. Even though this particular camera does not have the best sensitivity, it covers a good range of the IR spectrum (7.5–14 μm) which is enough for detecting objects at very low light. These cameras are less costly relative to other IR cameras. The main reason why this camera is inexpensive is because it does not have an active cooling mechanism built in. On the flip side, the images produced by this camera do not possess the most accurate measurements.

One way to numerically visualize how insensitive uncooled Microbolometers are in comparison to cooled IR cameras is by measuring their respective noise-equivalent temperature difference (NETD) values. NETD essentially provides the detector’s ability to distinguish the internal noise of the detector from the IR images. Therefore, the higher the resolution, the smaller the NETD value. For example, cooled IR cameras that are photon based have NETD values less than 20 mK whereas Microbolometers have NETD values around 50 mK. 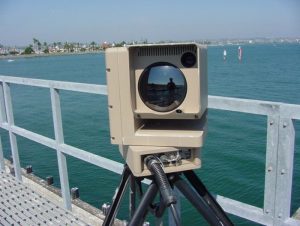 HgCdTe Cameras
Another type of infrared camera is known as the Mercury Cadmium Telluride (HgCdTe) camera. HgCdTe is the only type of material that can detect infrared radiation in two atmospheric windows: the mid-wave infrared window (MWIR, 3 – 5 micrometers) and the long-wave window (LWIR, 8 – 12 micrometers). Depending on the cooling, those cameras can also reach the SWIR spectral range (1-2.9um). HgCdTe cameras that detect in the LWIR range need very powerful cooling mechanisms (T = 77K) to reduce noise caused by thermally excited current carriers. On the other hand, MWIR HgCdTe cameras can operate at much higher temperatures but their performance is not as good as the performance of LWIR HgCdTe cameras.

InGaAs Cameras
Indium gallium arsenide (InGaAs) is an alloy. One of its main applications is as an infrared detector. Photodiodes that are made up of InGaAs operate in a preferred wavelength range of 1.1 μm < λ < 1.7 μm. When compared to photodiodes made up of other elements, such as Germanium (Ge), InGaAs photodiodes have higher quantum efficiency, faster response time, and lower dark current for the same sensor area. Today, many universities are heavily investing in InGaAs cameras because their higher quantum efficiency is key in capturing very high quality infrared images, especially in the Near Infrared (NIR) and Shortwave Infrared (SWIR) in the spectrum, for scientific research. An excellent example of InGaAs camera can be found here.

Ge Cameras
It is true that photodiodes made from Germanium are not as efficient and sensitive when compared to InGaAs photodiodes, however, their properties allow them to be excellent IR sensors. Ge is a very hard, high-density material that allows IR from 2μm but blocks ultraviolet wavelengths. In addition, Ge has the highest refractive index when compared to any other IR transmitters available in the market and has a low optical dispersion.

Summary
Similar to our eyes that can detect wavelengths in the visible spectrum, infrared sensors detect wavelengths in the infrared spectrum. For scientists and other professionals who do infrared photography, it is crucial for them to choose the IR camera that best suits their needs. For example, someone who sacrifices the resolution of IR images for affordability, he/she would most likely prefer using a microbolometer camera. However, if someone prefers taking IR images in either the LWIR or MWIR range, he/she would use a HgCdTe. The main purpose of this article was to give a brief overview of infrared sensor and types of cameras available for infrared imaging. However, in a future article, we will go over various applications associated to infrared sensors. 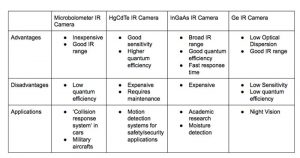