Optical aberrations are deviations from a perfect, mathematical model. It is important to note that they are not caused by any physical, optical, or mechanical flaws. Rather, they can be caused by the lens shape itself, or placement of optical elements within a system, due to the wave nature of light. Optical aberrations are named and characterized in several different ways. For simplicity, consider aberrations divided into two groups: chromatic aberrations, present when using more than one wavelength of light; and monochromatic aberrations, present with a single wavelength of light. 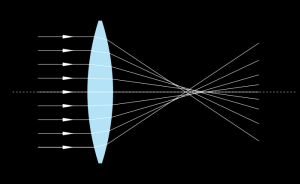 Spherical aberration compensation plates represent a shift in the paradigm for how optical designers and industrial end-users compensate and overcome spherical aberrations. They generate a new level of flexibility allowing for aberration correction to take place at the design phase, prototyping phase, or post production phase. Additionally, these corrector plates allow users to passively correct for known amounts of aberrations without a complete system redesign and without the inclusion of software and adaptive optics controls, saving time and money.

Historically, options for correcting spherical aberration have been expensive and cumbersome. These options include the use of adaptive optical systems, liquid lenses, or magnetorheological finishing of the final element in an assembly. In each of these cases, the process for reducing the spherical aberrations can be costly and extremely time intensive; making these solutions not well suited for OEM applications. Fortunately, the implementation of a single spherical aberration compensation plate is two orders of magnitude less expensive than most readily available adaptive optical systems.

Depending on their implementation, spherical aberration compensation plates can be used to improve system performance while reducing the total number of optical elements and thus reducing system weight, assembly time, and cost. As a component-level optic, the applications and benefits of these corrector plates are only limited by the creativity of their end-users.