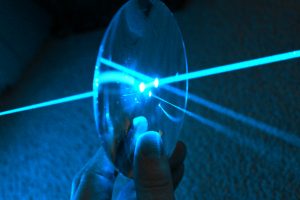 Refraction of Light
Refraction is the bending of light rays as they pass from one medium into a second medium. It results from the fact that light travels at slightly different speeds in different media. How much a light ray is refracted will depend on how different its speed is in the second medium from the first. The greater the difference in speeds, the greater the angle of refraction. As a ray of light passes from one medium to another – such as when it exits a pond of water, or when it passes through your eyeglasses – you may have noticed that it bends. This is called refraction, and it happens at different angles depending on the incident light and the material. It is also how eyes can see and transmit images to the brain.

You can think about this using the principle of least time. Imagine a lifeguard trying to reach a swimmer, far down the shore and out in the water, in the shortest amount of time possible. She knows she can run much faster than she can swim. Trying to get to the swimmer by traveling in a straight line would be inefficient because of her slow swimming speed relative to her running speed; instead, she runs down the beach until she is nearly in front of the swimmer, and then jumps in the water. The distance she travels is longer, but the time traveled is shorter because of her different speeds in different mediums. This is what light does when it is refracted. Water waves can also be refracted when traveling between areas of different depths, because waves will travel at different speeds depending on whether they are in shallow water or deep water.

This leads to a phenomenon called dispersion, which can be seen in light prisms: When white light, which contains light waves of many different wavelengths, enters a prism, each component light wave is refracted at a different angle depending on its wavelength. This creates the appearance of a rainbow.

The index of refraction in air is dependent on many factors including pressure and temperature. The "waves" seen emanating from hot objects like pavement in the summer occur because light refracts differently through hotter air than cooler air, causing distorted images. In addition, air near a hot road in the summer can actually reflect light that comes toward an observer at a shallow angle, making it appear as if there were a mirror or a reflective water surface on the road.

n1sinθ1 = n2sinθ2
This equation can predict the angle at which light will refract in a given medium, if the indices of refraction of both mediums and the incident angle are known. It holds true in any situation involving the refraction of light, with any two mediums.

Total Internal Reflection
If light waves pass from a medium with a high index of refraction to a medium with a lower index of refraction, there is a critical angle above which the light becomes bent enough that none of it moves into the other medium. This is called total internal reflection. The critical angle is the incident angle for which the outgoing ray has a refraction angle of 90 degrees. So θi = sin-1(ni/nr). At angles above the critical angle, all light undergoes total internal reflection.

Total internal reflection explains why, from a certain angle, the water/air surface in a fish tank when observed from below will look like a perfect mirror. Air has a much lower index of refraction than water, and so light waves at a shallow angle to the surface from below will reflect off of the surface instead of refracting through it, creating a mirror. Total internal reflection can also occur in water waves and sound waves.

Lenses
The refraction of light in a medium can change when the surface between mediums is curved. In fact, light that is coming from the same direction will refract at different angles depending on where on the curved surface it hits. 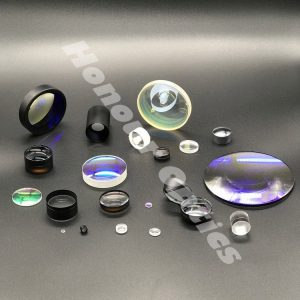 Lenses are pieces of transparent material with curved sides that use refraction to affect the path of light. A converging lens is thicker in the middle, allowing light rays entering from one side of the lens to converge to a focal point on the other side. This is what magnifying glasses and some telescopes use. A concave lens is thinner in the middle than it is at the edges, and light rays entering from one side are refracted outwards and spread apart as they emerge on the other side.

Both kinds of lenses are used in corrective vision, whether in eyeglasses or contacts, depending on what the problem in the eye is.

Examples
Our eyes interpret light using refraction. Light enters the cornea and then the lens, refracting into a precise point at the retina. The image is then transmitted to the brain through the optic nerve. Teary eyes lead to blurred vision because of the refractive properties of tears.

Anything containing optical fibers relies on total internal reflection. The fibers have a high index of refraction and are surrounded by material with a very low index of refraction. As light travels through the fiber, its angle with the outside of the fiber is low enough to keep it from escaping. This allows the fiber to carry very focused light a great distance. Fiber optics are used primarily in internet and telephone services. 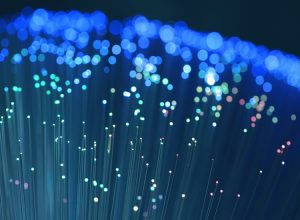 Rainbows are caused by refraction and reflection of sunlight off of water droplets in the air. This can happen after rainstorms or in misty conditions, but also near waterfalls and fountains. As mentioned before, different wavelengths (colors) of light have slightly different indices of refraction for a given material, which makes them refract at different angles. An observer then sees a rainbow of colors, in order of wavelength.

Refraction is why water in a pond looks shallower than it really is. As soon as light in air enters water, it bends at a shallower angle to the surface because of refraction. To an observer on the "air" side of the surface, it appears as if everything below the surface is shallower, because the light is bent at shallower angles.

The critical angle also influences the way gemstones are cut. A gemstone can be cut such that light that enters it undergoes total internal reflection when it hits the back facets, emerging out the front of the stone again to make it seem brighter. Diamond, with a high index of refraction, is particularly ideal for this, making it a popular gemstone.