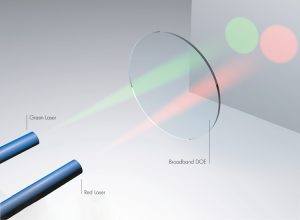 Diffusers are an optical component used to evenly distribute light from a source while eliminating bright spots. A perfected diffuser should create Lambertian scattering where the radiance is independent of angle. With applications ranging from projector screens to targets in imaging applications it is important to understand which diffuser type is right for you.

There are three common types of optical diffusers: holographic, white diffusing glass, and ground glass. Please view the following chart for a brief evaluation of the diffusers.

Holographic Diffusers
Holographic diffusers are optics formed through holographic etching on polycarbonate material; the material is liquid glass for the fused silica option. The result is similar to a diffractive optical element, however the etching pattern is of a random arrangement. These optics are used to diffuse the illumination of filament lamps, LEDs, arc lamps, and other sources. Standard ground glass and white diffusing glass will produce diffuse illumination, but the diffuse light area will often exceed the requirements of the system. This over-illumination, associated with traditional diffusers, reduces efficiency and can often lead to added costs by requiring higher power illumination sources, lenses, and possibly filters. It is important to note that diffusing angles are given for a collimated input beam and angular divergence will vary for different incidence angle.

• Has a stable transmission efficiency of wavelengths from 325nm to 1500nm of over 90%.
• Elliptical and circular diffusing outputs
• UV holographic diffusers also available •

• Diffusing angles will change depending on the angle of the input beam.

• Semi-opaque white glass substrate diffuses light evenly
• Solid diffusive material, allowing it to be used in any orientation
• Diffusive on both surfaces
• Transmitted light is near-Lambertian

Ground Glass Diffusers
Ground glass diffusers are optical windows that are sandblasted to produce a rough surface that will scatter light. Normally a 120-grit or 220-grit sandblast specification will be used for this series. The finer the grain (higher number) the better the transmission efficiency. However a coarser grain will allow for a wider diffusion pattern.
Undergoing two orthogonal passes during this sandblast process yields an even diffusion across the surface. The scattering is a compromise of low scatter loss and medium diffusion. Typical applications include use in screens, illuminator diffusion, and targets.