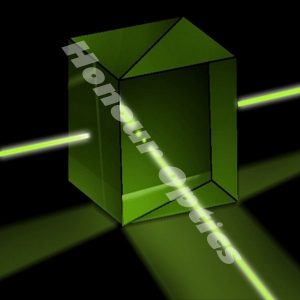 Polarizers are defined by a few key parameters, some of which are specific to polarization optics. The most important characteristics are:

Construction: Polarizers come in many forms and designs. Thin film polarizers are thin films similar to optical filters. Polarizing plate beamsplitters are thin, flat plates placed at an angle to the beam. Polarizing cube beamsplitters consist of two right angle prisms mounted together at the hypotenuse. Birefringent polarizers consist of two crystalline prisms mounted together, where the angle of the prisms is determined by the specific polarizer design.

Clear aperture: The clear aperture is typically most restrictive for birefringent polarizers as the availability of optically pure crystals limits the size of these polarizers. Dichroic polarizers have the largest available clear apertures as their fabrication lends itself to larger sizes.

Optical path length: The length light must travel through the polarizer. Important for dispersion, damage thresholds, and space constraints, optical path lengths can be significant in birefringent polarizers but are usually short in dichroic polarizers.

Cost: Some polarizers require large, very pure crystals, which are expensive, while others are made of stretched plastic, which make them more economical. 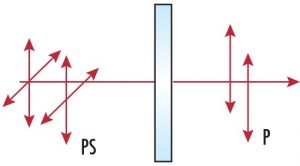 Birefringent Polarizers
Birefringent polarizers transmit the desired polarization and deviate the rest. They rely on birefringent crystals, where the refractive index of light depends on its polarization. Unpolarized light at non-normal incidence will split into two separate beams upon entering the crystal, as the refraction for s- and p-polarized light will be different. Most designs consist of two joined birefringent prisms, where the angle they are joined at and the relative orientation of their optical axes determine the functionality of the polarizer. Because these polarizers require optically pure crystals they are expensive, but have high laser damage thresholds, excellent extinction ratios and broad wavelength ranges.