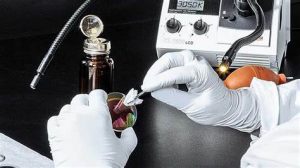 In 1996, the ISO issued standard 10110, which was basically taken from the German standard DIN 3140. It has since been adopted as a national standard by Germany, Japan, France, Russia and other nations, and is used in many others, including increasing numbers in the U.S., notably for the National Ignition Facility. At the time of writing, the most recent version was ISO 10110-7:2008.1

One of the ways the ISO standard differs from those discussed above is the way it categorizes surface defects. The very concepts of scratches and digs are closely related to the historical process of grinding lenses with abrasives. The ISO standard instead approaches the problem strictly from the perspective of dimension. Instead of digs, the category “localized surface imperfections” includes not only digs but also any scratch shorter than 2 millimeters. Longer scratches then fall into the category “long scratches.” The square root of the total defect area for a region is the grade number for that region.

At the time of writing (summer 2010), the U.S. is in the process of adopting as an American National Standard (ANSI/OEOSC OP 1.110), a modified version of ISO 10110. Among other slight differences, it is likely to permit the (optional) use of military standards.