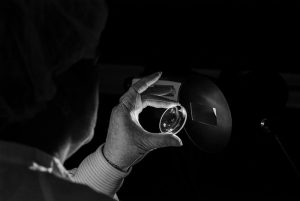 In 2000 efforts began to draft a voluntary American National Standard that would serve most of the purposes of the military standards. The standard was first issued in 2006, with the first revision in 2009. One of the useful features of this standard is that it offers a choice of methods, one for cosmetic purposes and a dimensional one for functional purposes. The cosmetic one is a cleaned-up version of MIL-PRF-13830B, using the same two-numeral designation and relying on the same Picatinny prototypes, but removing ambiguities and clarifying the testing procedures. For scratches, it is a visibility standard, and subjective.

The dimensional method uses letters instead of numbers in its notation, so it is immediately obvious that the dimensional method is intended. The letters and their values are taken from MIL-C-48497A; the standard provides an easy transition for anyone previously using the military standards. Actual measurement of the dimensions of a scratch is required.

A feature not available under the military spec is that specifications are not limited to the pre-defined maximums, but can be any value — just follow the letter “A” with a number. For example, “F-F” would be a functional equivalent to the cosmetic “80-50”, but “A45-A350” would call for scratch with a maximum width of 45 microns and digs with a maximum diameter of 350 microns. In practice, this feature is most likely to be used to specify scratch widths smaller than 5 microns.