Coefficient of Thermal Expansion
An athermal optical system should be developed for applications subjected to temperature fluctuations. Athermalizing optical systems involves balancing the coefficient of thermal expansion (CTE) and the change in index with temperature (dn/dT) of the materials used to make the system insensitive to the thermal change in their environment and the resulting system defocus. Developing an athermal design is especially critical in infrared applications. 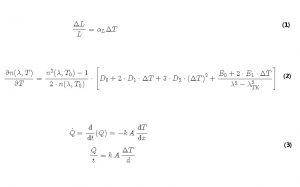 CTE is a measure of the fractional change of a material's size due to a change in temperature. This thermal expansion is defined as equation (1). 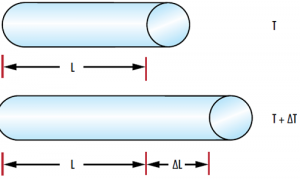 L is the original length, ∆L is the change in length, αL is the linear CTE, and ∆T is the change in temperature. Typically, as an object heats up it becomes larger due to the increased kinetic energy of its constituent molecules. However, there are some rare exceptions where there is an inverse relationship between temperature and length, such as water, where its CTE becomes negative below 3.983°C and causes it to expand as the temperature drops below 3.983°C.

As shows above figure, changes in temperature (∆T) lead to a change in the length of a material (∆L) based on the material’s coefficient of thermal expansion (CTE)

The CTE is given in units of 1/˚C. When selecting an optic for your application, CTE is important to consider because changes in the optic’s size may influence alignment and stresses on the component. In environments involving swings in temperature, users need to be cognizant that their optic will not expand when heated. An optic that is 25mm at room temperature may be 25.1mm at 300˚C, which could break the mounting or skew light in an unwanted direction, thereby affecting pointing stability or laser alignment; this is generally why a small CTE is desired.

dn/dT is irrelevant for reflective optics, except for minor performance variations due to changes in the refractive index of the coating. However, dn/dT is an important property for transmissive optics as it helps determine their stability under temperature variations. There will always be some absorption with a high power laser beam incident on an optic, leading to an increase in temperature; dn/dT determines how much this affects performance.

The change in an optical component’s refractive index with temperature (dn/dT) can lead to a shift in a lenses focal length (∆f), changing the focus position

Q represents the amount of heat transferred in time t, and the units of Q/t are J/s, or W. A is the cross-sectional area of the substrate, ΔT is the temperature difference between one side of the material and the other, and d is the material’s thickness.

Materials that do not reflect or transmit specific wavelengths will absorb more light and heat up more quickly; examples include colored glasses and absorptive filters. If non-steady state accumulation of heat occurs in the optic, damage will quickly ensue, especially without the addition of an effective cooling system. Even then, if optical components are non-homogenous their ability to conduct heat is non-uniform and hot spots in the material could quickly and more effectively cause damage to the component. Similarly to the temperature coefficient of refractive index, understanding thermal conductivity is important for modeling high power laser systems and understanding what optical performance effects to expect.