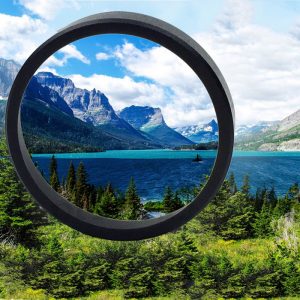 Optical coatings are critical for enhancing the transmission, reflection, polarization, and phase of light incident upon and passing through optical components. There are many different technologies used to fabricate optical coatings, but in the vapor-phase, they generally fall into two categories: physical or chemical. The most common physical deposition (PVD) methods are thermal evaporation and sputtering. The fastest rising chemical vapor technique is atomic layer deposition (ALD) and although it has many unique capabilities, it is not covered in this article.

No single coating technology is the best option for all situations, as different applications drive different requirements. The below table provides a high-level overview of the differences between four PVD techniques: 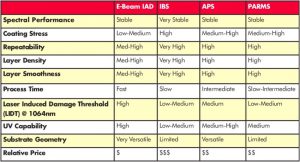 Ion-assisted electron-beam (IAD) evaporative deposition, bombardment from an electron gun vaporizes source materials in a vacuum chamber, which then condenses onto optical components in low-stress, and very low (UV) loss layers of a specified thickness with good density. This is thanks to the coincident ion-bombardment provided by an ion beam gun. E-beam coatings have the highest laser induced damage threshold (LIDT) in the near infrared (NIR) spectrum out of the listed coating technologies, as well as the widest range of useable materials, which allows for the highest flexibility in the coating design space. IAD e-beam evaporative deposition can also accommodate larger coating chamber sizes than the other coating methods and tend to have the capability of producing coatings at the lowest cost. On the down-side, depending on the type of ion source used, IAD can result in slightly lower film densities and coatings with limited smoothness and reflectivity. For the same reason, e-beam evaporative deposition may exhibit less repeatable optical properties, making precise control of layer thickness more challenging compared to ion beam or magnetron sputtering. 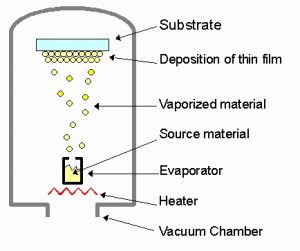 Ion beam sputtering (IBS) produces coatings with very high optical quality and stability. In the IBS process, a high-energy beam of ions is directed onto a target consisting of the desired coating material, causing the material atoms to “sputter” off the target and onto the optical surfaces. This deposition process results in deposition atoms with significant kinetic energy (~10's to 100's eV) packing the atoms into dense, hard, and smooth coatings with incredibly repeatable film properties, even over very long layers or run times. This, combined with high-speed substrate rotation, leads to exceptional layer thickness accuracy, and the capability of reproducing even the most challenging designs, including very high reflectivity and/or ultra-fast chirped mirrors, and very sharp transition filters. However, IBS has some drawbacks, such as higher stress and UV loss, which limit IBS to certain “well-defined” applications. Slower growth rates and uniformity challenges also lead to higher relative cost. Despite these limitations, IBS is uniquely suited to certain applications that the other techniques cannot match. 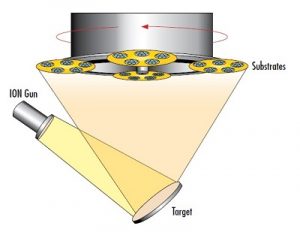 Advanced plasma sputtering (APS) is an enhanced version of e-beam evaporative deposition with a greater capability toward automated processing. Rather than using a directed ion-beam to assist in densification of the coating as in IAD, APS uses a hot cathode DC glow discharge plasma to generate ions inside the entire chamber of the process. It is ideal for situations requiring the same level of versatility as e-beam IAD, but where more stable optical properties allow for greater stability and film quality approaching that of sputtering. APS can produce dense, hard, and smooth coatings in volume at a similar price structure to e-beam evaporative deposition, but is limited by the fact that it still requires iterative process development (unlike sputtering) and suffers from the higher stress and higher UV losses due in part to the greater energy density of the process.

Plasma assisted reactive magnetron sputtering (PARMS) is another plasma generation-based, physical vapor deposition process in which a glow discharge plasma is generated, but instead of filling the entire chamber, the plasma is “confined” near a target by a magnetic field. Positive ions in the dense plasma near the target are accelerated and strike the surface with enough momentum to cause atoms at the surface to “sputter” off and deposit onto substrates. The confinement of the plasma near the target allows the sputtering process to run at a high efficiency while maintaining a relatively low chamber pressure. Low chamber pressures are required for coating a high volume of optics. In PARMS, reactive gasses are added to improve the stoichiometry of the films. The result is dense, hard films with excellent repeatability, but not as high a repeatability as IBS. It has a high throughput, however, so PARMS provides an often-optimal middle ground between price and performance. For example, PARMS can be an ideal technique to use in applications requiring relatively high optical performance and relatively high volume, such as fluorescence filters.