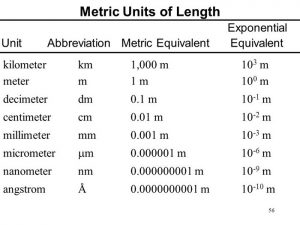 A metric unit of length = 10⁻⁶ meter, abolished by the CGPM in 1967 but in continued use. Symbol, μ. The name and symbol were adopted in 1879 by the CIPM and again in Resolution 7 of the 9th CGPM (1948). In 1967 the 13th CGPM abolished the micron (Resolution 7), partly because its symbol had been transferred to the new “micro-” prefix. The approved SI term for the micron's length is micrometer (symbol, μm).

Nonetheless, “micron” is still the term most commonly used in certain fields, including semiconductor fabrication. It is often used in describing the sizes of particles retained by air and water filters, the range of wavelengths of light to which an optical instrument responds, and in machining. One application in which its use is currently specified by national standards is in describing the fineness of wool and other textile staples.

Certain authors in the mid-20th century use the plural “micra”.

The micron was often encountered in the millimicron = 10⁻⁹ meter, or ¹⁄₁₀₀₀th of a micron. Symbol, mμ. Like the micron itself, the millimicron is obsolete. The current SI unit having the same value is the nanometer (symbol, nm).