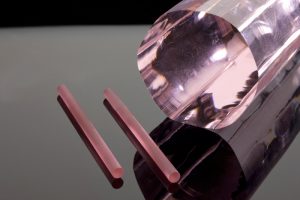 Newer Er:YAG lasers with longer (500 µm) and variable pulses have been developed. They have better tissue penetration, which makes deeper tissue ablation less difficult. They create larger zones of thermal necrosis, leading to more collagen contraction and better remodeling. Although the postoperative erythema is greater and lasts longer than with the short-pulsed Er:YAG lasers, it is still less severe than after the carbon dioxide laser.

The Er:YAG laser operates at a more superficial level and with greater precision. Similar to the carbon dioxide laser, its chromophore is water; however, the energy is absorbed by a different absorption peak at a different wavelength. The Er:YAG emits a wavelength of 2940 nm, which is absorbed by water because of its 3000-nm absorption peak. This translation of Er:YAG laser energy into mechanical work is an important factor that protects the surrounding tissue; minimal thermal energy remains to dissipate and cause collateral damage. Immediately after the target tissue reaches its peak temperature, it begins to cool. The thermal relaxation time is the amount of time required for it to cool to half its peak temperature.

The variable-pulsed carbon trioxide (CO3) Er:YAG laser delivers pulse durations from 500 microseconds to 10 milliseconds. Shorter pulse durations are used for tissue ablation, and longer pulse durations are used to induce collagen contraction through thermal injury. Er:YAG laser resurfacing is most suitable for facial skin, which has more adnexal structures and, thus, a greater capacity to regenerate new cells than the skin of the trunk. Several studies document successful rejuvenation of the neck, chest, arms, and hands with the Er:YAG laser. However, the risk of scarring is significant because of the paucity of adnexal structures in these areas.