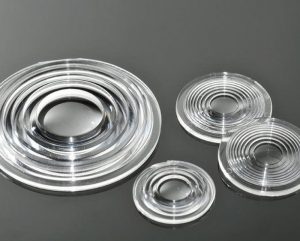 Fresnel lenses consist of a series of concentric grooves etched into plastic. Their thin, lightweight construction, availability in small as well as large sizes, and excellent light gathering ability make them useful in a variety of applications. Fresnel lenses are most often used in light gathering applications, such as condenser systems or emitter/detector setups. They can also be used as magnifiers or projection lenses in illumination systems, and image formulation.

A Fresnel lens replaces the curved surface of a conventional optical lens with a series of concentric grooves. These contours act as individual refracting surfaces, bending parallel light rays to a common focal length. As a result, a Fresnel lens, while physically narrow in profile, is capable of focusing light similar to a conventional optical lens but has several advantages over its thicker counterpart. 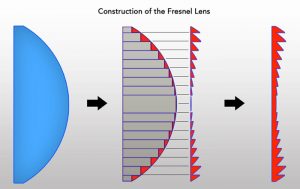 THE THEORY OF FRESNEL LENSES
18th-century physicists began experimenting with the creation of what is known today as a Fresnel lens. At that time, grooves were cut into a piece of glass in order to create annular rings of a curved profile. This curved profile, when extruded, formed a conventional, curved lens – either spherical or aspherical. Due to this similar optical property compared to a conventional optical lens, a Fresnel lens can offer slightly better focusing performance, depending upon the application. In addition, high groove density allows higher quality images, while low groove density yields better efficiency. However, it is important to note that when high precision imaging is required, conventional singlet, doublet, or aspheric optical lenses are still best.

MANUFACTURING FRESNEL LENSES
The first Fresnel lenses were made by tediously grinding and polishing glass by hand. Eventually, molten glass was poured into molds, but it was only with the development of optical-quality plastics and injection-molding technology in the 20th-century that the use of Fresnel lenses in many industrial and commercial applications became practical.

Fresnel lenses can be manufactured from a variety of substrates. They are manufactured from acrylic to polycarbonate to vinyl, depending on the desired wavelength of operation. Acrylic is the most common substrate due to its high transmittance in the visible and ultraviolet regions, but polycarbonate is the substrate of choice in harsh environments due to its resistance to impact and high temperature.

Light Collimation and Collimation
A Fresnel lens can easily collimate a point source by placing it one focal length away from the source. In a finite-conjugate system, the grooved side of the Fresnel lens should face the longer conjugate, because this produces the best performance.

One of the most common applications for a Fresnel lens is the collection of solar light, which is considered very nearly parallel. Using a Fresnel lens for light collection is ideal for concentrating light onto a photovoltaic cell or to heat a surface. 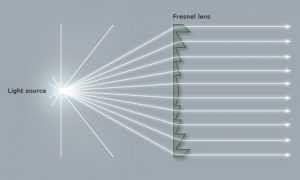 Magnification
Another common application for a Fresnel lens is magnification. It can be used as a magnifier or projection lens; however, due to the high level of distortion, this is not recommended. Also, the image quality does not compare to that of a higher-precision system given the amount of distortion.
While commonly found in solar applications, Fresnel lenses are ideal for any application requiring inexpensive, thin, lightweight positive lens elements. Fresnel lenses are not new technology, but their pervasiveness has increased with improvements in manufacturing techniques and materials. Fresnel lenses are truly unique optical lenses which make them a great tool for a range of interesting and fun optical designs.