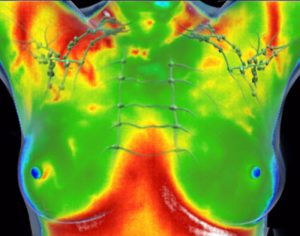 Infrared imaging is a technique that detects thermal radiation and produces images of heat distribution and fluctuation. Due to the black body radiation law, all the objects with a temperature higher than absolute zero emit infrared light, and the warmer the objects, the more infrared light is radiated. As a consequence, infrared imaging can manifest targets in backgrounds that have different temperatures, even though the targets can be hard to discern with naked eyes.

Light is perhaps the most prevalent matter that we can perceive in the universe, but it was not until the recent two centuries before our knowledge about light deepened. In 1800, Sir Frederick . W . Herschel noticed an unexpected thermal effect beyond the red end of sunlight. His experiments unveiled the existence of infrared radiation, an invisible yet thermally perceivable energy form. Thanks to this discovery and the booming of sensing electronics in the 20th century, our visual horizon expanded into this longer-wavelength region, making a profound step in the history of imaging technology.

The pits on the python‘s face help to produce thermal images of a mouse.

The unique feature of infrared imaging — the ability to trace targets in low visibility environments — has naturally associated its early development with military application. Surprisingly however, human was not among the first races that managed to incorporate thermal imaging into their weapon systems. Pythons for example, have highly evolved sensory organs on their faces (facial pits) allowing them to “see” heat radiation in a certain wavelength range. Hence, in spite of their poor eyesight, pythons are still able to accurately detect the preys with their “thermal radars” and then accomplish the fatal strikes.

SWIR cameras can see the city through smoke.

In recent years, infrared imaging equipment has been tailored into several sub-categories so as to provide reliable imaging quality in various battlefield environments. Sensors sensitive to infrared light in different wavelength regions are fabricated and integrated with powerful signal processing components, giving rise to short, mid, and long wavelength infrared imaging techniques (SWIR, MWIR, and LWIR respectively) with different functional emphasis. SWIR for example, could achieve high-contrast and low-noise image capture in dark environments like nighttime. This is because most of the starlight and background radiation (night-glow) falls into this wavelength region. Also, by illuminating objects with SWIR laser, which is invisible to naked eyes, and receiving the reflected signals with SWIR cameras, troops will be able to recognize, and observe the targets without alerting opposing forces. More importantly, due to its adjacency to visible spectrum, SWIR “sees” objects in a manner very similar to visible light, making it easy for practical operation. Unlike SWIR, MWIR and LWIR trace thermal signatures emitted by targets. They could covertly surveil the activities of terrorists when their body temperatures are higher than the surroundings. Thus infrared imaging equipment can put soldiers at an enormously advantageous status over their enemies.

While harvesting contracts from governments’ defense and security projects, thermal imaging also drew the attention of medical researchers who had foreseen its potential to facilitate diagnose of diseases. The idea was based on a clinical fact that changes in skin temperature usually accompany the typical symptoms of many diseases. When hitting patients’ bodies, these diseases break the physiological balance, resulting in abnormal blood flow around certain regions, and therefore higher or lower skin temperatures. By mapping out the real-time temperature gradients of patients’ body, doctors will be able to visualize efficiently the progress of diseases and the effects of therapeutic efforts. 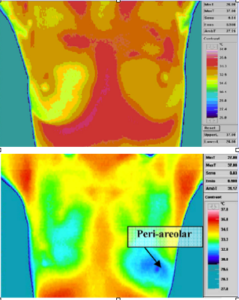 Comparison of normal and cancerous tissue under an infrared camera.

Till now, infrared thermography has proven its effectiveness in a number of medical fields, and more efforts are being made to enrich its versatility. Breast cancer, for example, can be diagnosed by infrared imaging with average sensitivity and accuracy up to 90%. A plausible reason is that the formation of new blood vessels caused by tumor leads to intensified blood flow. Also, elevated regional skin temperatures has been noticed prior to the occurrence of inflammation and ulcer.Thus, hyperthermia recorded by infrared thermography could assist early-diagnose and arranging preventive measures.

In addition to disease treatment, thermal imaging also contributes to the development of injury management. An apparent advantage is that thermography involves no physical contact, therefore, successfully avoiding secondary injuries during inspection and treatment. In recent years, thermographic imaging is becoming a reliable reference for health conditions. For example, it has been demonstrated that a temperature difference greater than 0.7°C between two sides of the body can be regarded as abnormal because the thermographic images of the whole body are usually symmetric. Also, when examining tendonitis in racehorses, researchers detected hot spots by thermal imaging two weeks before bloating. More evidences have been reported in favor of the thesis that infrared sensing can predict impending symptoms.

Apart from medical researchers, infrared imaging also benefits scientists and engineers who aim to monitor experimental and industrial manufacturing processes. Thermal phenomena attributed to energy exchange are prevalent in numerous physical and chemical reactions. Depicting the real-time thermal distribution and variation can assist in-depth analysis of scientific principles and control of complex production procedures. A perfect example to illustrate the significant role of thermography in scientific research is the revolutionary fusion energy development. Nuclear fusion can offer almost inexhaustible energy of super high-density and ultracleanness. Yet, the reaction processes span a large temperature range (several million degrees Celsius for initiation), and involves extremely delicate monitor of plasma. Using infrared imaging, researchers will be able to accurately measure the heat dissipation, patterns, leakage and other temperature factors in the equipment, realizing a powerful control ofreactions stages. On a much smaller scale, for instance, microchip manufacturing, thermal imaging microscopes enable engineers to efficiently characterize the quality of the tiny electronic components, and hence examine the overall performance of the chip. 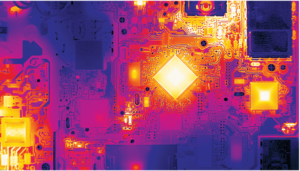 A functioning circuit board under an infrared camera.

In other R&D fields, thermography also prevails. In the test of powerful aerospace engines, engineers employs thermal imaging to detect the hot spots on turbine blades caused by air friction. Other dynamic scenes, like explosions, can be “frozen” and visualized by thermography combined with a high-speed camera that allows microseconds exposure time. Also, by triggering and observing heat flow, scientists investigate residual stress and other mechanical properties of materials to gain insights of how to improve the resilience and strength of materials.