From night vision cameras to powerful telescopes, the range of applications involving infrared technology is vast. In the previous article, we covered the basics of infrared technology and the types of cameras currently used for infrared imaging. In this article, however, we will focus on a few important applications of infrared sensors. Today, infrared imaging is widely used in obtaining observational data in astronomy, making cars safer, and generating weather maps in meteorology. In a different domain, military often conducts stealth operations using infrared cameras to enhance night vision. In sports, such as football and cricket, officials use infrared cameras to make key decisions. There are many more applications of IR technology that we regularly use to make our lives safer and better.

Applications of Microbolometer-Based Infrared Sensors
Due to Microbolometer camera’s low cost relative to some other alternative infrared sensors, many industries choose to invest in this infrared imaging technology. In particular, the automotive industry is leading the utilization of these sensors for enhancing the vehicles’ safety and performance. One such application is “collision avoidance radar system“. Microbolometer IR sensors that are installed in cars use heat signature from the surroundings to detect potential situations where collisions may be plausible. After identifying such a situation, the system provides feedback signal to the automobile computer that engages the brakes and, if necessary, deploys the airbags to prevent or minimize the impact. This technology is also used in identifying potentially hazardous objects during nigh time. In addition to cars, military aircraft manufacturers, such as Lockheed Martin, use microbolometers primarily to detect enemy vessels at night and at low visibility. 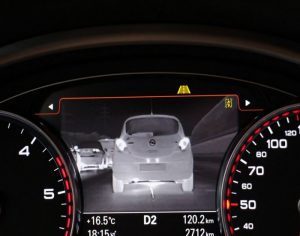 Infrared sensors are routinely being implemented in cars for safety and luxury. One of the best features of this technology is its ability to detect other cars and people at night, as evident by this image.

Night Vision Cameras
One of the most popular applications of IR technology is night vision. From amateur hiking to sensitive military operations, night vision cameras have always shown their benefits. Biologically, human eyes have a lower range of spectral wavelength coverage when compared to animals. Therefore, more often than not, when people go to the woods or jungles at night, dangerous animals tend to seek out humans much more easily. As a result, most professionals use night vision cameras when venturing out in dangerous places at night. In military, very sensitive operations are done at night. Therefore, night vision cameras are necessary in conducting such stealth mission. One of the most recognized stealth missions that used night vision cameras was the capture of Osama bin Laden in 2011. If you are interested in reading more about the type of night vision technology used in conducting this mission, please click here.

Infrared Cameras in Astronomy
Even though optical telescopes can be used to study celestial bodies in our solar system, infrared cameras are needed to identify and analyze objects in interstellar space. This is mainly because the information we get from distant objects, such as stars, galaxies, and nebula, gets hindered due to extinction. In other words, the electromagnetic radiation emitted by the objects gets absorbed and scattered by interstellar dust and gas. This is why optical cameras fail to identify such objects in much detail. However, due to the fact that infrared cameras only detect thermal radiation emitted by objects, using them to detect celestial objects eliminates the effects of extinction. Many space based telescopes, such as Hubble Space Telescope (HST) and Spitzer, use infrared sensors to detect and study distant celestial objects.

In 2021, one of the main goals of NASA’s James Webb Space Telescope’s (JWST) Near Infrared Camera (NIRCam) team is to study protostars in the high star forming regions of galaxies. Protostars are very early stages of a star when nucleosynthesis has not begun in its core. One of JWST’s Guaranteed Time Observation (GTO) programs will plan to observe a young star cluster in the NGC 2024 emission nebula where several hundred young stellar objects can be found within the 2.2×4.4 arc-minute Field Of View (FOV) of JWST’s NIRCam instrument. This program will allow researchers to observe and identify giant planets ejected through dynamical interactions as well as very low mass brown dwarfs. One of the main goals in this program is to investigate how well the NIRCam instrument will be able to distinguish young, very low mass objects from contaminating field stars in the galaxy. 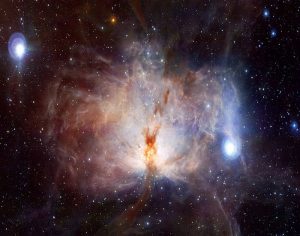 One of the guaranteed time observing program of JWST involves using a near infrared camera to detect protostars in a region that is contaminated by dust and gas. This image shows the target field of this JWST program.

Infrared Cameras in Medicine
Many of the early signs of life-threatening diseases can be detected through the means of thermography. Thermography is essentially defined as the use of thermograms, such as infrared sensors, to map out heat distribution in a structure, for example a tissue. One of the most useful applications in thermography is detecting cancerous tissues or tumors. Some of the early diagnostics of tumors are done using a thermogram. When a person suffers from breast cancer, for example, cancer cells grow and multiply very fast. Since the blood flow and metabolism are higher in a cancerous tissue, the temperature of the tumor goes up. As a result, it becomes easier for infrared cameras to detect it.

Summary
Today, most of our technology use infrared sensors to make our lives safer. For example, the cars we drive use infrared cameras to check for blind spots, activate braking system when a collision is probable, activate windshield wipers when it rains, and help identify hazardous objects during night. In astronomy, infrared cameras are being applied to the next generation of space telescopes to detect planets and stars in outer space. In medicine, thermograms are being used to diagnose and detect deadly cancers, potentially helping save lives of millions of people. Even though infrared sensor has its fair share of disadvantages (high cost, maintenance, etc), it is no doubt that we will continue to use this technology to further science and innovation.