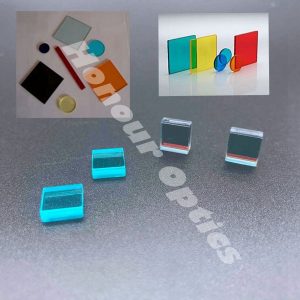 Angular Shift
The shift of a filter’s nominal design wavelength due to an increase of the angle of incidence (AOI) from perpendicular AOI. The shift is always directed towards shorter wavelengths. It is possible to use the following equation to estimate the angle shift of the spectral curve:
λ(θ) = λ0 [1-(sinθ/n*)2]½ where n* = [nL x nH]½
λ0: nominal design wavelength
θ: AOI
nL: refractive index of low index material
nH: refractive index of high index material

Beamsplitter (BSP)
Optical component, dividing the incident light into two parts. The transmitted and the reflected light is separated by tilting the splitting surface. The beamsplitter is designed to work at a specific AOI (e.g. 45º).

Blocking Filter
Filter designed to reject the sideband transmission of a primary filter.

Cross-Talk
A spurious signal in fluorescence detecting systems arising from spectral areas where both the excitation and emission filter transmit.

Full Width at Half Maximum (FWHM)
Bandwidth at Tmax/2 of a bandpass filter.

Optical Density (OD)
A logarithmic measure to specify the wavelength dependent blocking performance of a filter (see also our presentation).

Pinholes
Small holes and imperfections in the coating.

Polarisation
The state of polarisation is determined by the motion of the electrical field vector related to the lightwave. The electrical field vector is described by two components: P and S. Light polarised parallel to the plane of incidence is P-polarised. Light polarised perpendicular to the plane of incidence is S-polarised.