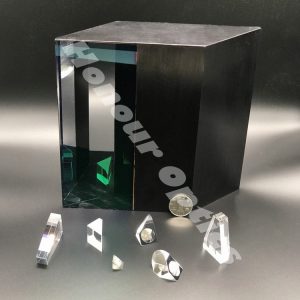 The nature of light was a major controversy in the sciences in the 1600s, and prisms were at the center of the storm. Some scientists believed light was a wave phenomenon, and some thought it was a particle. English physicist and mathematician Sir Isaac Newton was in the former camp – arguably its leader – while Dutch philosopher Christiaan Huygens headed up the opposition.

The controversy eventually resulted in the compromise that light is both a wave and a particle. This understanding wasn't possible until the introduction of quantum theory in the 1900s, and for almost 300 years, scientists continued to perform experiments to confirm their point of view. One of the most important involved prisms.

The fact that a prism disperses white light forming a spectrum could be explained by both the wave and corpuscular theory. Now that scientists know that light is actually composed of particles with wave characteristics called photons, they have a better idea of what causes light dispersion, and it turns out it has more to do with wave properties than corpuscular ones.

Refraction and Diffraction Occur Because Light Is a Wave
The refraction of light is the reason why a prism disperses white light forming a spectrum. Refraction occurs because light travels more slowly in a dense medium, such as glass, than it does in air. The formation of a spectrum, of which the rainbow is the visible component, is possible because white light is actually composed of photons with a whole range of wavelengths, and each wavelength refracts at a different angle.

Diffraction is a phenomenon that occurs when light passes through a very narrow slit. The individual photons behave like water waves passing through a narrow opening in a seawall. As the waves pass through the opening, they bend around the corners and spread out, and if you allow the waves to strike a screen, they will produce a pattern of light and dark lines called a diffraction pattern. The line separation is a function of the diffraction angle, the wavelength of the incident light and the width of the slit.

Diffraction is clearly a wave phenomenon, but you can explain refraction as a result of the propagation of particles, as Newton did. To get an accurate idea of what's actually happening, you need to understand what light actually is and how it interacts with the medium through which it travels.

Think of Light as Pulses of Electromagnetic Energy
If light were a true wave, it would need a medium through which to travel, and the universe would have to be filled with a ghostly substance called the ether, as Aristotle believed. The Michelson-Morley experiment proved that no such ether ether exists, however. It turns out that it actually isn't needed to explain light propagation, even though light sometimes behaves as a wave.

Light is an electromagnetic phenomenon. A changing electric field creates a magnetic field, and vice versa, and the frequency of the changes creates the pulses that form a beam of light. Light travels at a constant speed when traveling through a vacuum, but when traveling through a medium the pulses interact with the atoms in the medium, and the velocity of the wave decreases.

The denser the medium, the slower the beam travels. The ratio of velocities of incident (vI) and refracted (vR) light is a constant (n) called the index of refraction for the interface:

Why a Prism Disperses White Light Forming a Spectrum
When a beam of light strikes the interface between two media it changes direction, and the amount of change is dependent on n. If the angle of incidence is θI, and the and the angle of refraction is θR, the ratio of angles is given by Snell's Law:

There's one more puzzle piece to consider. The velocity of a wave is a product of its frequency and its wavelength, and the frequency f of the light does not change as it passes the interface. That means the wavelength must change to preserve the ratio denoted by n. Light with a shorter incident wavelength is refracted at a greater angle than light with a longer wavelength.

White light is a combination of light of photons with all possible wavelengths. In the visible spectrum, red light has the longest wavelength, followed by orange, yellow, green, blue, indigo and violet (ROYGBIV). These are the colors of the rainbow, but you'll only see them from a triangular prism.

What's Special About a Triangular Prism?
When light passes from a less dense to a more dense medium, as it does when it enters a prism, it splits into its component wavelengths. These recombine when the light exits the prism, and if the two prism faces are parallel, an observer sees white light emerge. Actually, on closer inspection, a thin red line and a thin violet one are visible. They are evidence of slightly different angles of dispersion caused by the slowing down of the light beam in the prism material.

When the prism is triangular, the angles of incidence as the beam enters and leaves the prism are different, so the angles of refraction are also different. When you hold the prism at the proper angle, you can see the spectrum formed by the individual wavelengths.

The difference between the angle of the incident beam and that of the emergent beam is called the angle of deviation. This angle is essentially zero for all wavelengths when the prism is rectangular. When the faces aren't parallel, each wavelength emerges with its own characteristic angle of deviation, and the bands of the observed rainbow increase in width with increasing distance from the prism.

Water Droplets Can Act Like Prisms to Form a Rainbow
You've no doubt seen a rainbow, and you may be wondering why you can only see them when the sun is behind you and you're at a particular angle to the clouds or to a rain shower. Light does refract inside a water droplet, but if that were the whole story, the water would have be between you and the sun, and that's not what typically happens.

The light from the sun has a downward trajectory. Light can exit from any part of the raindrop, but the greatest concentration has an angle of deviation of about 40 degrees. The collection of droplets from which light emerges at this particular angle form a circular arc in the sky. If you were able to see the rainbow from an airplane, you would be able to see a complete circle, but from the ground, half the circle is cut off and you only see the typical semicircular arc.