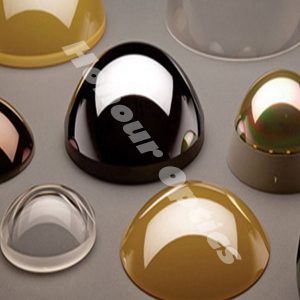 "Dome" is an optical element that features a concave internal surface that is precisely matched to a convex exterior surface so that the interior and exterior surfaces are parallel and equally spaced over the entire optical element. The most common use of a dome optic is as a protective window from water, wind, radiation, or debris. Chemical and mechanical stability make glass and acrylic very popular materials for domes. Domes of this type are used for applications such as security systems, remote-controlled vehicles, solar radiation sensors, underwater photography, and submarine portals. 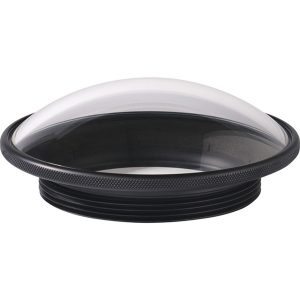 Dome windows are preferred over flat windows for four reasons:

Large FOV: Compared to a flat window, a dome has a considerable larger field of view. Completely hemispheric domes are not uncommon.

Pressure resistance: The pressure on a dome is equally distributed across the entire surface, making them an excellent choice for submersible applications where FOV and pressure-resistance are both critical.

A unique aspect of dome optics is that, ideally, a dome would be "invisible" and have no effect on the light passing through them. Invisibility of glass, UV and IR crystal and acrylic domes is impossible because of the change in refractive index between the dome and the environment, but it is possible to minimize the optical effects of a dome by controlling four parameters:

Thickness: Minimizing the distance between the inner and outer surfaces means that the light passes through less material, and that reduces the effect of the dome.

Refractive index: There will be an optimal index of refraction for the dome to have the least effect on rays traveling from the exterior of the dome to the interior.

Centration: If the surfaces of a dome window are not concentric, the variation in thickness causes the window to begin to act as a lens.

Pupil position: Because the dome does affect the optical performance, it is important to design an optical system so that the entrance pupil is in the best position, which is usually at the center of curvature of the dome surfaces. 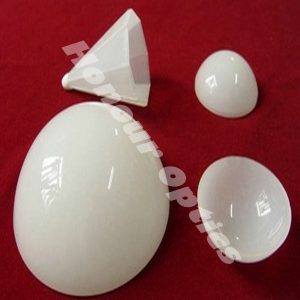 Optimizing the optical design of a system that includes a dome requires a very clear understanding of the application of the system, the material properties of glasses and acrylics, and the unique optical effects of dome windows. Honour Optics sells glass, crystal and acrylic domes with diameters as small as 20 mm and as large as 150 cm, and we have the optical and mechanical expertise to ensure our customers choose the best components for the entire optical system based on application and use environment. Give us a call to talk to one of our engineers and learn how.