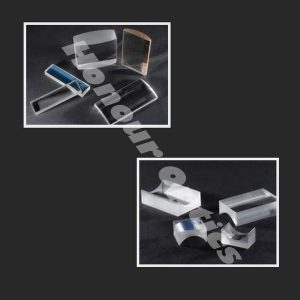 Because cylindrical and spherical optics both have circular profiles when viewed end-on, it is a common misconception that identical production methods apply to both. Both methods do use similar principles of grinding and polishing, but there are a number of very important differences. Here are three of the most significant areas of difference.

Equipment: Conventional grinding and polishing takes advantage of the 360° symmetry of a sphere. Cylindrical optics are technically aspheric lenses, although they are not generally classified as such because the curvatures are easily defined in terms of circular arcs. Regardless, cylinder lenses do require different fixturing and different grinding geometries than a spherical lens.

Processing: Even for identical materials, cylindrical and spherical lenses have significantly different responses to pressure, stress, and strain. This affects issues such as grinding speed and polishing slurry composition.

Metrology: The majority of commercial interferometers are geared toward measuring spherical optics, which means that reference surfaces are readily available. Such is not the case with cylinders. Cylinder metrology often requires custom-made optical elements. Cylinders also require different vibration-resistant mounts than spherical elements do.

Although the differences in fabrication methods between spherical and cylindrical optics are significant, they do not necessarily affect the cost of similarly toleranced elements. Knowledge of the differences is still valuable, though, because such factors may affect production rates and available quantities.