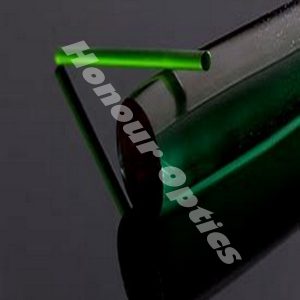 Laser gain material can be single crystal, semiconductor, ceramic or dye. Among them single crystal (monocrystalline material) laser gain material is the best because it has higher transition cross sections, a smaller absorption and emission bandwidth, a higher thermal conductivity, and possibly birefringence. In most cases, they are doped with either trivalent rare earth ions or transition metal ions.

There is a wide range of crystalline media, which can be grouped according to their atomic constituents and crystalline structures.

- disordered tetragonal double tungstates such as NaGd(WO4)2 (NGW) and NaY(WO4)2 (NYW): particularly large gain bandwidth of ytterbium chalcogenides such as ZnS or ZnSe for mid-infrared lasers

Laser Crystals with Integrated Saturable Absorber: A few laser crystal materials have been demonstrated where some saturable absorber material is incorporated for passive Q switching of a laser. For example, Cr4+ ions can be incorporated into such Nd-doped crystals for emission in the 1-μm spectral region. This has been tried with Cr:Nd:YAG and Cr:Nd:YVO4, for example.