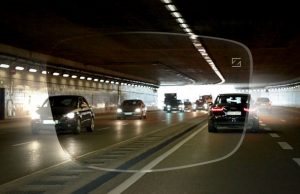 In our prior blog post we discussed the properties and major uses of Anti-reflective Coatings. We also talked about how how anti-reflection is not a property of materials. Rather, it is a consequence of light’s wavelike behavior when passing through a specific geometric setup, and is therefore somewhat independent of which material we are using. Today we will dive into that concept further and learn about the inner working of anti-reflective coatings.

Transparency & Reflection
Similarly, transparency and reflection are also opposites, since more photons reflected entails less photons passing through. However, increasing transparency at the cost of reflection is not straightforward. The amount of light reflected by a transparent material does not depend on the wavelength. Common glass, for instance, reflects around 8% of light, no matter which kind of light is incident. In fact, increasing some materials’ transparency actually improves their reflection. 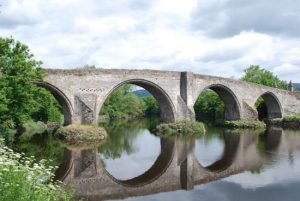 Transparency & Translucency
The difference is that transparency is more than letting light pass through, which is translucency. Transparency is to let light pass through UNDISTURBED. Often, an object is translucent because its surface is not smooth, like an unpolished crystal. And this is equally true for reflection. A rough surface reflects far worse than a smooth one.
Thus if a beam of light falls on a transparent object, the reflection will be sharper than if the object were translucent. So even a reduced reflected ray can hurt the eyes. This is what could make transparent materials quite hard to see through under some circumstances such as night time.
It seems unavoidable to have good transparency without also having good reflection. Yet that is precisely what anti-reflective coatings do. And the way they work is one of the greatest ‘tricks’ of light, now widely used by mankind.

Physics of Anti-reflective Coatings
Light exhibits many wave-like phenomena. Anti-reflection is a process involving three of these processes: interference, refraction and reflection.

1. Interference
Interference is one of the most beautiful but complex aspects of waves. And it is also the key ingredient of anti-reflection. So let us tackle it first.
Unlike particles, two waves can exist at the same point in space at the same time. When waves meet, unlike particles, they don’t ‘bump’ into each other, they don’t collide. Instead they merge into a single wave (see figure below). The merged wave is simply the sum of the amplitudes of its two constituent waves. Therefore if a crest meets a crest, the crests add up. This is a common sight on the beach: reflected waves from the shore meet the incoming waves. 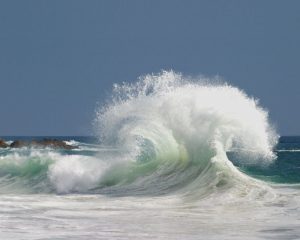 Waves reflected from the beach collide with incoming waves and momentarily double their crest height. 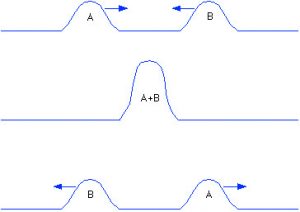 If two waves meet, they merge and produce a wave equal to both their amplitudes.

So how do AR coated objects produce interference?
Anti-reflective coatings are simply a transparent layer of a different material from the original transparent object. Both materials have different refractive index. Light passing through both mediums ends up being reflected twice. First when it hits the surface of the AR coat, second when it hits the surface of the object. Thus we have two distinct rays R1 and R2 traveling in the same direction away from the object. 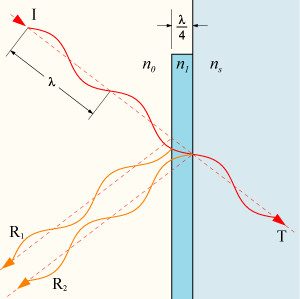 2 reflected rays are produced due to the 2 transparent surfaces. The width of the coating layer ensures the interference is destructive.

Interference from two similar waves traveling in the same direction is a regular wave – that depends solely on the phase difference of the two waves (see figure below). The phase difference is caused by the fact that ray R1 travels a distance shorter by 2w than ray R2 (w – being the width of the coating layer). Different phase differences produce different merged waves. The most interesting case is when the two waves are separated by half the wavelength. The resultant wave has zero amplitude. At every point, the two waves cancel each other.
This is exactly how antireflective coatings work. But for this to happen, we need to guarantee that the two reflected waves are completely out of phase.

And how is that helpful?
As mentioned, the additional distance travelled by the second ray is simply twice the width of the coating layer. Therefore, if we give the object a coat of transparent paint of a width of a quarter of the wavelength of the light, then R2 will be out of phase by half a wavelength and therefore produces destructive interference with R1. The interference produced will result in a wave with zero amplitude.

Destructive interference is produces when 2 waves are out of phase by half a wavelength.

This is a wonderful but strange phenomenon. Adding a transparent layer actually doubles the reflected light. But by doubling the reflected rays, we have effectively managed to eliminate them!

3. Refraction
Light’s speed is slower when traveling through a medium. The refractive index is proportional to the speed drop. The wavelength also shortens. This fact also needs to be taken into account when calculating the phase difference between the two rays. The extra distance traveled by the second reflected ray must be equal to half of the shortened wavelength of light, and not the wavelength of light in air.

Conclusion
To sum up, the surface of the anti-reflective coatings and the object surface on which it is applied reflect incident light rays. Light’s ability to break up into multiple rays and interfere with itself to cancel out produces one of the most unexpected but useful effect. The thinner the layer, the shorter the wavelength of light it can cancel.