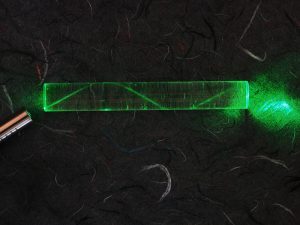 Many people misunderstand what a “light-year” is. Although it sounds like a measure of time, because it includes year, it’s actually a distance. In a sense, it’s a distance expressed in terms of the speed of light, so you can also have other measures like a light-day or even a light-second. However, this is only part of the story, because distances on a cosmic scale are complicated by the expansion of the fabric of space-time. Calculating a light-year is easy, simply multiply the speed of light by the number of seconds in a year, but calculating cosmological distances isn’t quite so easy. The redshift of the object is the easiest thing to objectively define, but there are other concepts like the comoving distance that can be useful too.

Light year = speed of light × number of seconds in a year

The speed of light is usually given the symbol c, and if you multiply it by any length of time (t), you’ll get that “distance of light” (dL) out of the calculation. So you could write:

That calculation used 365.25 days per year to account for leap years. Similarly, a light-day is:

Distances over a cosmological scale are complicated because the whole fabric of space-time is constantly expanding. So, for example, if a light signal from a distant galaxy comes toward us, it moves at the speed of light and probably takes hundreds of millions of years to complete the journey. During that time, space itself has expanded, and so the distance is even farther than it would have been at the start of the journey. This makes it really hard to define what it really means to say something has traveled a certain distance through space. The “comoving” distance expands along with space, so it accounts for this problem, but it still isn’t right for all purposes.

The most objective measure of distance in space is the “redshift.” This measures how much the light wave has “stretched out” (moving it closer to the red end of the spectrum) because of the expansion of space during its journey. If it travels farther, it will have shifted the wavelength of the light more.

Redshift (z) is defined as:

Finding cosmological distances is pretty challenging. Although you can calculate it, the best approach is to use a cosmological calculator with some standard parameters already input. Enter the redshift of the object you want to find the distance to, using the parameters suggested by the calculator, and it will return many distance measures, including the comoving distance and the light travel time. You can multiply the light travel time (converted into seconds, as in the first section) by the speed of light to find the distance traveled by the light itself.