Meniscus lenses are primarily used for focusing to small spot sizes or collimation applications. Plano convex lenses often offer a superior price-to performance ratio. There are scenarios, though, where meniscus lenses provide significantly superior performance at only a moderate increase in price. 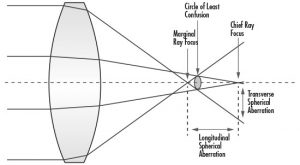 For a fixed index of refraction and lens thickness, an infinite number of radii combinations exist that can be used to create a particular focal length lens. These combinations of radii create different lens shapes which directly result in spherical aberrations and coma due to the degree in which a ray bends as it travels through the lens.
The lens shape can be described by the Coddington shape factor, C. C=R2+R1/R2-R1 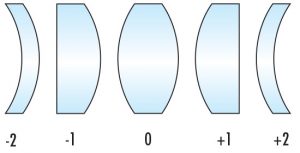 Using the thin lens aberration equations with an object at infinity and the stop at the lens, we can derive the condition for minimum spherical aberration.

Assuming a constant wavelength could be held, relationship between index and shape factor for minimum spherical aberration can be visualized. 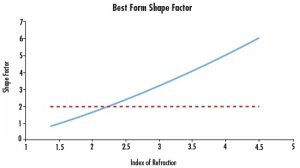 Benefits of Meniscus Design
When working in the visible, glass indices typically range from 1.5 to 1.7 and the shape for minimum spherical aberration is nearly plano-convex. In the infrared, however, higher index materials like germanium are typically used. Germanium, with its index of 4.0, greatly benefits from a meniscus lens design by significantly reducing spherical aberrations.

While meniscus lenses can still provide increased performance in the visible, typically there is not enough gain to offset the added manufacturing costs. The below table compares the performance in the visible spectrum of a 25 x 50mm calcium fluoride (CaF2) PCX lens with a comparable meniscus, along with the infrared performance of a 25 x 50mm germanium (Ge) PCX lens with a comparable meniscus lens. The germanium lenses exhibit a significant reduction in spot size when a meniscus shape is used.