Soft Coatings
Soft coatings are multilayer thin films consisting of zinc sulfide, cryolite, and, sometimes, silver. For traditional interference filters, the coated components are laminated together in a vertical stack to provide some protection from the environment and, typically, cored from a larger wafer. Because of the materials and manufacturing process used, soft coatings are fragile. The coating material is often removed from the edges of the filter in order to avoid degradation caused by moisture and to increase the coating’s lifetime.

The cost of soft coatings is maintained by the low cost of the deposition equipment, fast cycle times, and inexpensive float glass substrates, but there are high handling costs due to the sealing and ring assemblies. The cost vs. volume ratio behaves with an asymptotic trend: expensive at low volumes and stabilizing only after a few dozen 1" pieces or a handful of 2" or larger pieces are created.

Hard Coatings
Hard coated films are developed using a plasma deposition process that provides multiple benefits compared to soft coatings. The plasma deposition process is tightly controlled using a computer, which allows for even layering, high environmental aptitude, and improved performance. For instance, not only is the transmittance of a hard coating more consistent as a function of wavelength, but it is also generally superior to the transmittance of a soft coating.
Hard coatings can provide over 90% transmission throughout the visible spectrum and into the UV. On the other hand, soft coatings cannot achieve 90% transmission and face significant performance declines near the UV. Additionally, there are improvements with cut-on and cut-off transitions. Soft coatings have a gradual change from no transmittance to maximum transmittance, while hard coatings achieve much steeper transition. 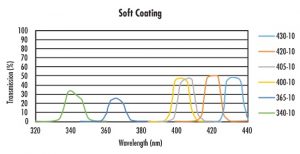 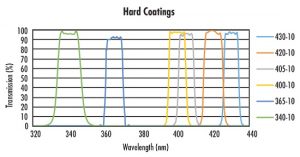