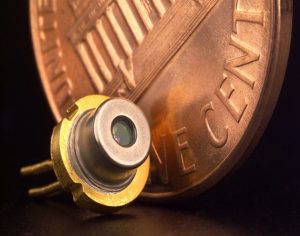 Laser diodes, a technology used for gas analysis, find a large number of applications in industrial and environmental fields.

What is Gas Analysis?
Gases are all around us. While some gases have noticeable odors, most are virtually undetectable by human senses. Gas detection first became a concern when certain gases proved to have a harmful effect on human health. In the 19th and early 20th centuries, miners brought canaries into coal mines to serve as a detection method for carbon monoxide, carbon dioxide and methane. In the presence of life-threatening gases, the canaries would stop singing, signaling the miners to evacuate. This is one of the earliest known methods for gas analysis.

Today, a variety of methods exist to more accurately detect and analyze gases in many different areas. Carbon monoxide detectors are installed in households to alert families if the dangerous gas is present, airports utilize gas chromatography to detect explosives, and hospitals use human breath analyzers as a diagnostic tool for patients.

Given that gases are frequently undetectable, the ability to analyze their composition is crucial to human health and safety. Gas composition gives us clues as to how different processes are operating and allow us to improve them. Currently, several optical, laser and spectroscopic gas analysis technologies exist. The three main avenues include laser absorption spectroscopy, photoionization, and paramagnetism.

Operating Principles and Applications
Laser Absorption Spectroscopy
The operating principle behind many gas analysis technologies has to do with laser absorption spectroscopy. Since different molecules absorb different light wavelengths, the amount of energy that a gas absorbs helps to identify its composition. The discovery of characteristic absorption spectra has led to very accurate gas detection and analysis. 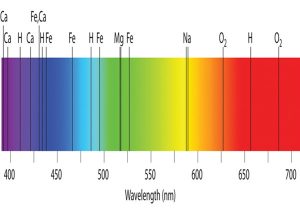 Tunable Diode Laser Spectrometers (TDLS)
TDLS is a type of laser-based gas analyzer used for measuring low concentrations of gases, like methane, water vapor, ammonia, or carbon dioxide, using laser absorption technology. In TDLS, the emission wavelength of the laser is adjusted to the same absorption lines of the target molecule. Then, a photodiode detects the reduction in signal intensity resulting from the absorption and determines the target gas concentration.

The challenge behind TDLS is selecting a suitable absorption line for the compound in question. However, when used properly, TDLS is highly specific and sensitive. Its non-intrusive nature and ability to measure many different points simultaneously has recently proven useful in combustion diagnostics. Improving the efficiency of combustion in motors, engines, and furnaces is a major concern of the future considering limitations of fossil fuels and their negative environmental impact. Thus, the ability to monitor these processes more accurately opens the door to new and improved technologies.

Infrared (IR) Spectroscopy
Similar to TDLS, IR spectroscopy analyzers target gas composition by measuring the absorption of a light source through the gas sample. However, IR spectroscopy specifically focuses on IR wavelengths to excite the molecules of a gas. IR light is commonly encountered in everyday life. Although it is invisible to the human eye, it is regularly felt as heat. 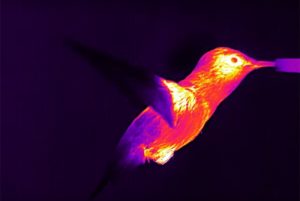 An infrared camera detects the infrared energy of a hummingbird.

In this category falls a technology called Fourier Transform Infrared Technology (FTIR), which involves emitting light with a combination of light frequencies at a sample and measuring the absorption of the gas. This process is repeated several times with different combinations of light frequencies. Computer processing then converts the raw absorption data into a result using a Fourier Transform algorithm. It can measure more than 20 different gases simultaneously and is relevant for almost any IR-absorbing gas. This method is ideal for measuring carbon dioxide and organic compounds. Typical uses include monitoring vehicle emissions, process control, gas purity, agricultural emissions, greenhouse gas, and landfill gas. Intoxilyzer, a device that targets alcohol content in human breath, also operates using IR spectroscopy and is extremely useful in the medical and forensic fields.

Additionally, Ammonia Sensors are very sensitive devices that also employ IR spectroscopy to detect ambient levels of atmospheric ammonia in the environment. Breath analysis, a common medical procedure, is a non-invasive method for detecting volatile organic compounds (VOCs) derived from normal metabolic activity or pathological disorders that are excreted through exhalation. Human breath analyzers are used in the diagnosis kidney disorder and malfunction or abnormal pregnancy in humans. Whereas blood sample results may require 24-48 hours, the human breath analyzer can determine ammonia concentration in less than 2 minutes.

Photoionization
Photoionization detectors (PID), another useful gas analysis technology, are typically paired with gas chromatography instruments to target VOCs. Compounds in a gas sample are exposed to photons in the ultraviolet (UV) range. Positively and negatively charged ions form as the gas molecules absorb the high-energy UV light. Electrodes then measure the charge of the ions and convert the signal into an electric current indicating the concentration of the target gas. 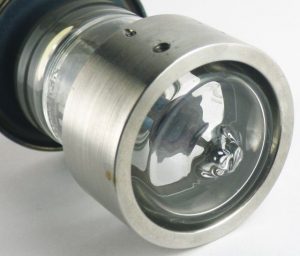 PIDs are extremely sensitive and can detect and measure gases in the parts per million (ppm) or parts per billion (ppb) range. However, the monitor cannot easily distinguish between different chemicals and requires additional technologies to differentiate. Photoionization is commonly implemented in handheld devices used for health and safety precautions in confined and industrial working facilities.

Paramagnetic
The paramagnetic analyzer is a technology that specifically targets oxygen concentration in a gaseous sample. The operating principle behind this technology is unique due to the paramagnetic physical properties of oxygen molecules. In this particular design, two nitrogen-filled glass spheres are suspended in a magnetic field. The magnetic field attracts the oxygen molecules, resulting in a force on the glass spheres called torque. Light from an emitter reflects off a centrally placed mirror and onto a photocell, which detects the torque and generates a signal. This determines the oxygen content in a sample. This technology is versatile in the sense that it can accurately measure very low and high concentrations of oxygen. 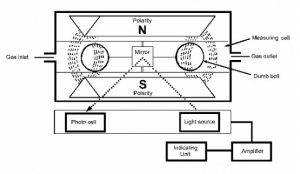 Industries commonly use paramagnetic analyzers to monitor vehicle emissions, combustion efficiency, and process chemical gas analysis, and other applications. In medicine, medical gas analysis is crucial as it provides a basis for modern anesthetic procedures, aids with resuscitation, and provides life support for patients. Most importantly, paramagnetic analyzers ensure that the patient receives the correct concentration of oxygen.

Conclusion
In conclusion, regardless of the operating principle, it is clear that gas analysis is applicable in many fields. From medical to industrial sciences, these technologies offer rapid and sensitive results that can improve our knowledge on various processes.

With the world population expected to reach 9.7 billion by 2050, improved health care technologies will become even more critical. Especially in developing countries where population growth will be most devastating, low-cost, rapid and reliable detection methods may be the difference between life and death.

Additionally, experts predict that by 2100, average global temperatures will increase at least 2.7°F if an immense reduction of greenhouse gas emissions is not achieved. In response to changing climate, the Environmental Protection Agency (EPA) and the National Highway Traffic Safety Administration (NHTSA) have developed a new set of regulations that aim for an average 54.5 mpg for passenger vehicles by 2025, thus reducing emissions. Gas analysis technologies will be essential to monitor the progress and ensure engines meet operational standards.

Meanwhile, in the defense department, increased global travel demands increased security measures. In 2015, the Transportation Security Administration (TSA) conducted tests to assess a passenger’s ability to smuggle weapons and explosives through security checkpoints. Officers failed to confiscate these items 67 out of 70 times, corresponding to a failure rate of 95.7%. This alarming rate suggests that more developed technology, rather than reliance on human abilities, may be necessary to keep public transportation safe.

As the global population continues to grow, the need for improved health care, industrial regulations and defense technologies will never be lacking.