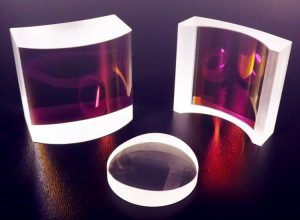 Cylinder lenses are similar to spherical lenses in the sense that they use curved surfaces to converge or diverge light, but they have optical power in only one dimension and will not affect light in the perpendicular dimension. This is impossible to accomplish using spherical lenses as light will focus or diverge uniformly in a rotationally symmetric manner. Cylinder lenses play an important role in the manipulation and shaping of laser light and are used for forming laser light sheets and circularizing elliptical beams. Due to the asymmetric nature of cylinder lenses and the specialized manufacturing processes required, it is important that the centration, wedge, and axial twist are specified and properly controlled. 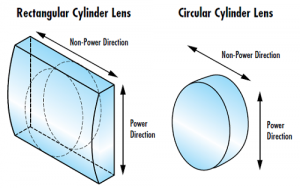 Errors, Aberrations, and Specifications
No manufacturing process is free of imperfections, and cylinder lens manufacturing is no exception, which makes small amounts of geometric errors unavoidable. Misalignment during the polishing process could lead to a number of mechanical errors specific to cylinder lenses that can cause optical aberrations and negatively impact performance. Therefore, these errors must be tightly controlled to guarantee the performance of the lens. These errors are defined with respect to geometric datums including the planar side of the lens and the edges of the lens. 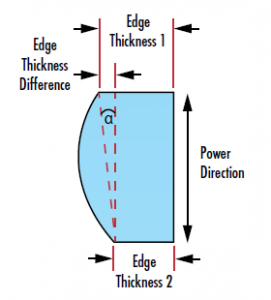 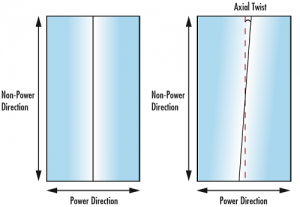 Applications
Cylinder lenses are most commonly used in laser beam shaping to correct an asymmetric beam, create a line, or generate a light sheet. Modern scientific methods such as Particle Image Velocimetry (PIV) and Laser Induced Fluorescence (LIF) often require a thin laser line or an even laser light sheet. Structured laser light is also an important tool for scanning, measurement, and alignment applications. With low cost laser diodes now readily available, another common application is simply circularizing the elliptical output from a diode to create a collimated and symmetric beam.

Forming a Light Sheet
A light sheet is a beam that diverges in both the X and the Y axes. Light sheets include a rectangular field orthogonal to the optical axis, expanding as the propagation distance increases. A laser line generated using a cylinder lens can also be considered a light sheet, although the sheet has a triangular shape and extends along the optical axis.
To create a true laser light sheet with two diverging axes, a pair of convex or concave cylinder lenses orthogonal to each other are required. Each lens acts on a different axis and the combination of both lenses produces a diverging sheet of light. 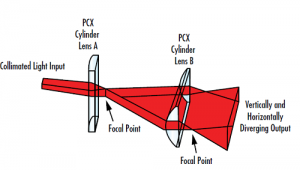 Circularizing a Beam
A laser diode with no collimating optics will diverge in an asymmetrical pattern. A spherical optic cannot be used to produce a circular collimated beam as the lens acts on both axes at the same time, maintaining the original asymmetry. An orthogonal pair of cylinder lenses allows each axis to be treated separately.

To achieve a symmetrical output beam, the ratio of the focal lengths of the two cylinder lenses should match the ratio of the X and Y beam divergences. Just as with standard collimation, the diode is placed at the focal point of both lenses and the separation between the lenses is therefore equal to the difference of their focal lengths. 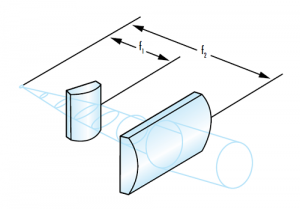 Laser diodes may have a very large divergence, which can be a challenge when trying to collimate because divergence has a direct effect on the allowable length of the system, as well as the required sizes of the lenses. As the relative positions of each component are fairly fixed due to their focal length, it is possible to calculate the maximum beam width (d) at each lens using the focal length of the lens (f) and the divergence angle (θ) of the axis it is collimating. The clear aperture of each lens must then be larger than the corresponding maximum beam width.
(1)d=2f×tan(θ2)d=2f×tan(θ2)